Fall Back in Love Comedy Jam

For performances on:
Tickets available at:
https://bit.ly/3zSnRZC
Get Tickets

The creator of the Wild ‘N Out Live and April Fools Comedy Jam tours is back at it again and this time he is bringing along even more of his musical celebrity friends! Chicago native, comedian, producer, and TV personality Rip Micheals from Urban Eats & Treats and Wild ‘N Out is excited to announce that his newest event – Fall Back in Love Comedy Jam – starring Mario, August Alsina, and more will be coming to Arie Crown Theater. The stellar musical lineup for the Fall Back in Love Comedy & Music Jam features R&B stars Mario, Jacquees, and August Alsina, who became infamous after his “entanglement” with Jada Pinkett-Smith became public knowledge in 2020. Event producer Rip Micheals also serves as host and will be joined on stage by fellow comedians Zoie Fenty aka GotDamnZo, Brandon T. Jackson, Pretty Vee and SkinBone. 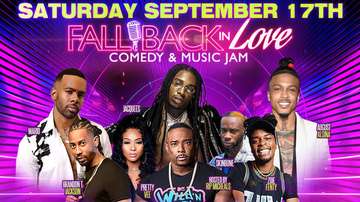