Free Outdoor Movie Event for Austin: High On The Hog

For performances on:
Tickets available at:
https://austincomingtogether.org/AustinEats/
Get Tickets

Join us for a FREE screening of the acclaimed documentary, High on The Hog: How African American Cuisine Transformed America, hosted by Austin Coming Together and One Earth Film Festival as part of the Austin Eats Initiative. Come for free food, cooking demos, chef talks, garden tours, giveaways, and more! Bring a friend, and a blanket or chair!

The documentary, which premiered in 2021, charts the indelible impact of African-American cuisine through a historical, societal, cultural and even agricultural lens. Food writer, chef, and former sommelier Stephen Satterfield is at the helm of this explorative project, which was met with critical acclaim upon its release. It won a Peabody Award and received nominations for an NAACP Image Award and a Black Reel Award.
This event is hosted by the Austin Eats Initiative, a group of 20+ local agencies and efforts that have come together to sow and grow a healthier Austin.
Learn more about how this event is part of a larger food education effort: austincomingtogether.org/AustinEats
Questions? Contact Event Organizer 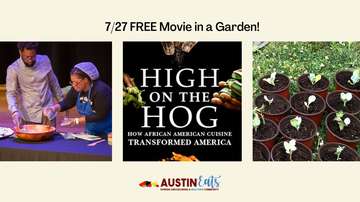