For performances on:
Tickets available at:
https://www.momenthouse.com/rickydillard
Get Tickets

The 12-song project is aptly titled, representing the first ticketed, live recording in gospel music since the interruption of the global pandemic. Without missing a beat, the dynamic artist breaks through the hardship of the past year, directing his famed choir through rousing, uptempo songs and passionate, heart-stirring ballads that declare freedom and hope. And true to form, Breakthrough: The Exodus is dynamically punctuated by Dillard’s signature band hits, staggering soloist features, and over-the-top soprano, alto and tenor parts. It is a live choir experience unlike any other.

Breakthrough: The Exodus picks up where Dillard’s double-GRAMMY®-nominated Choirmaster left off in 2020—firmly underscoring the sound, style, and spirit of the gospel choir, and encouraging listeners around the globe.

In 2019, Ricky Dillard signed with Motown Gospel, representing the first major label deal of his three-decade career in music. The inaugural release on the label, Choirmaster, immediately became one of his most successful projects to date, yielding a #1 single at Gospel radio (“Release” feat. Tiff Joy), a Stellar Award for Traditional Choir Album of the Year, and two GRAMMY® Award nominations. It was followed by the critically-acclaimed EP, Choirmaster: The Chicago House Remixes, an innovative nod to Dillard’s early days in music as a Chicago house music recording artist. 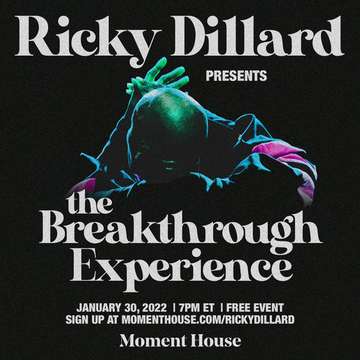 After you purchase tickets you'll get instructions and a link to attend the event online. wifi
© Ticket Island, Inc. 2022